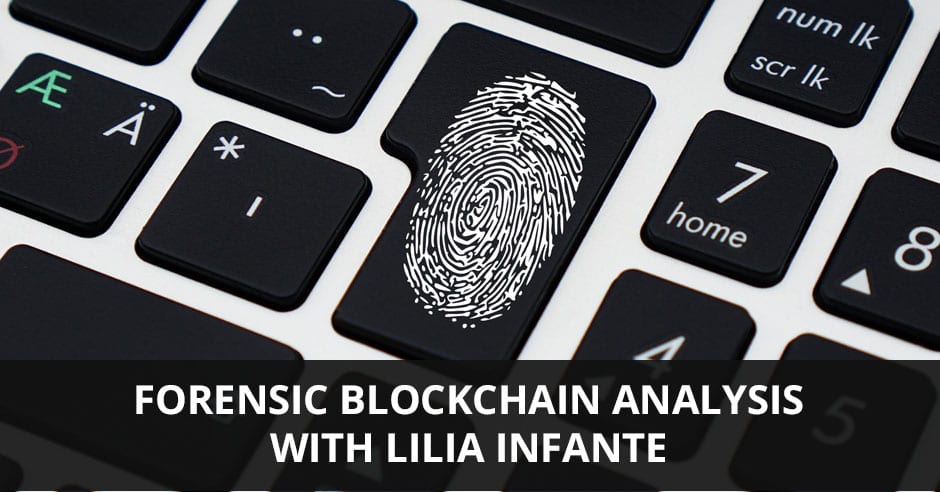 Bitcoin started out as the main currency being used on the first darknet market, The Silk Road. Other markets have sprung up and, consequently, the elicit uses of cryptocurrency have gone up. Lilia Infante, Special Agent for the DEA, talks about how Bitcoin has been successfully used for criminal activities. She shares how forensic blockchain analysis is being used to identify individuals exploiting bitcoin for illicit transactions as well as figure out the source of funds or where the illicit funds are ending up at.

I have Lilia Infante and she is a Special Agent for the DEA. What is she doing at a blockchain conference, at a cryptocurrency conference? A whole lot because the criminals had an early adoption of our blockchain and cryptocurrency world. Tell us a little bit about your experience there.

As we know, Bitcoin started out as main currency being used on the first darknet market, The Silk Road. Other markets have sprung up and the elicit uses of cryptocurrency have gone up. The point that I was making is the use case for Bitcoin in criminal activity is successful. They’re doing it well and they have a reason to do it. They want to remain anonymous. They want the convenience of not having to go on the street, being able to be online, to have an online store instead of having to deal with gangs with guns on the streets. The upside of using cryptocurrency for our criminal such as a criminal on the dark web is high. It’s also become a lot easier to become a drug dealer or a criminal on the dark web because of being able to use cryptocurrency, not having to use the banking system, not having to take credit cards and further identify yourself.

I saw that crazy movie about Barry Seal and the mounds of cash being hidden all over the place. That’s going through my head as you’re talking. You can see why the necessity was for them to create another way to do that and why they adopted it. The problem solution maybe not the best for us. You said something interesting on stage. You said that Bitcoin is the only decentralized cryptocurrency, but the other ones are not. What defines that? What does that mean?

I would define that as the network effect in the way that the cryptocurrency is being created in which case, mining. Mining is the most decentralized type of creation of cryptocurrency. The network effect, as in more people have used the Bitcoin network than any other network based on the fact that it’s been around for a lot longer.

There’s more anonymity there then. It creates it harder to go through that. It’s not as easy to track.

No, I wouldn’t say that it’s more anonymous. It’s more distributed because of the fact that it’s been around longer. People have been mining Bitcoin for a lot longer and not one single entity owns it or controls it.

You said that there’s not a lot of anonymity and it’s hard to hide. You’re a tech girl. Is it getting easier to find people in the dark web or are they still getting better at deceiving us?

I was completely self-taught. I went on the forums. I went on Reddit. I started expressing an interest personally in cryptocurrency not just in it using illicit transactions but in the technology itself. The internet is out there. Just read up on it, follow influencers on Twitter and YouTube. It’s a learning curve but with time, it’s possible to learn a lot.

If there’s something that you’re passionate about stopping, drug enforcement or sex trafficking or any of these things and you want to do it from a tech standpoint, it’s an open game in terms of learning it. Why not use it for good? You were a little bit skeptical about the use cases coming along. Can you talk a little bit about it? This audience is a lot of pro adopters. They are early adopters who are pro. It’s a tough crowd but there are a lot of skeptics out there. Tell us a little bit about why this use case hasn’t quite come along as most people think that it should.

What I’ve seen in the years that I’ve been exposed on cryptocurrency, Bitcoin first and then others is that most people even people here go into it for the money. They want those returns that all those early adopters had. I‘m not seeing any mass adoption happening and there’s a reason for that. The reason is there’s no motivation to use cryptocurrency.

It’s not as you put it on stage. It’s just not easier. We’re lazy. We want to make it easy.

We’re lazy. As human beings, we go into the path of least resistance. All the technology around us is working for us not to have to take care of the little things. We can do things that we enjoy as opposed to having to go to the store to buy stuff as opposed to just logging onto my Amazon account. That’s one of the examples of how technology makes my life easier. We have several people that are tech people that appreciate Bitcoin and what it stands for and I am one of them. If you look at the masses, the masses are not tech people. They just want their life to be easier.

Jessica VerSteeg said about paying her employees around the world. The first thought that came to my mind was, “That would be so much easier because I have 37 employees around the world personally.” Getting them their pay can sometimes be difficult because it’s crossing countries and you’ve got that exchange. I’m like, “I hadn’t thought about that.” There are some cases where making it easier, making it faster is going to come along but maybe not in the way everybody thinks.

Maybe not yet. There needs to be more awareness. Besides the learning curve of having to learn a technology to use it.

That’s the first thought that went in my mind. I was like, “How do I do that? Do I got to learn that?” I have a busy business to run and that’s not my top priority.

It’s not like you logging into QuickBooks or logging into PayPal. It’s a little bit of a learning curve. If you want to understand that technology which I recommend you do instead of just blindly using it, that’s very important. It’s important to understand why you would want to use Bitcoin. As I said, besides criminal activity and speculation, things like a situation in Venezuela. Exigent circumstances where value needs to be stored immediately. You can’t buy land, you can’t buy a house. All of a sudden, the US economy collapses or the debt bubble burst. Things like that may encourage people to start thinking about how do I protect my wealth? We live in a bubble. We live in a consumer society where all these technologies are available to us. We have Venmo, we have PayPal and we have all these amazing payment systems. It’s not going to be easier for us in America to use Bitcoin unless you care about your privacy or anonymity. That’s where it’s like, “Why do you care about privacy? What are you doing?” I’m not saying that only criminals care about privacy.

There is some case as a parent wanting to keep privacy as long as you can for your child. Something like that is important but maybe not in your everyday.

I want my privacy. Everybody wants privacy. Most people care more about how easy it is for me to live my life.

In your work at the DEA, is there anything as the community around, things that we can do to help you remove drugs from our community?

If you see something, say something. I would say in general that the emerging crypto companies such as exchanges, their cooperation with the government and they’re working with us. It’s extremely important for us to be able to catch these criminals that are killing people, sending fentanyl and pretty much poison to thousands of people every day through the dark web. If this technology, if this sphere of cryptocurrency is going to thrive, these companies who want to survive and don’t want to implode eventually, they need to start thinking about working with the government and help us out in making sure these bad guys are not multiplying.

Our whole industry doesn’t get subterfuge by more criminal activity.

We want to clean it. We want the clean the cryptocurrency industry.

I appreciate so much you coming on for our show and I appreciate your contribution and your viewpoints.

It’s my pleasure. Thanks for having me.