Nowadays, people are into digital lottery. That is, they are playing lottery from their phones. Tony DiMatteo from Lottery.com shares how they started letting people play digital lottery and how they have worked with the government to allow that to happen. He also reveals partnering with a global NGO to create global-impact raffles.

I have an interesting interview with Tony DiMatteo from Lottery.com. That is the best URL.

We’re pretty lucky to have it. Thank you for having me.

This is not my mom’s lottery and my grandmother’s lottery, right?

When you look at a security token, it's a security. That's a better way to raise money no matter what your project is. Click To Tweet

Not at all. We’re in a few different verticals. We started as letting people play the lottery from their phone in a completely legal and compliant way. We work with the states and governments to allow that to happen. That took a lot of hard work. We’re a few years old as a company, but what we’re getting into now is global impact raffles. We’re working with a global NGO. It’s well-recognized. They’re tasked with ending extreme hunger in the world. They raise about $7 billion a year on their own every year, but they need $10 billion. They have this $3 billion shortfall and it can figure out how to solve that. What we’re doing is this global raffle. It will have a billion-dollar jackpot and $3 billion of those sales will go towards this NGO as a donation.

Have you made some estimate on how many people need to play around the world?

It varies by country and the ticket prices will also be variable and fractional. We’ve got that entire math figured out.

Are we talking about billions of people playing?

No. Lotteries are low-ticket price where raffles are usually higher ticket prices and they happen less often.

Thinking about the raffles we used to have at churches and for our schools and things like that. You know that you’re donating going into it, but it’s fun at the same time.

You can maybe win $1 billion.

Can you imagine winning $1 billion? Look how crazy they went in the lottery that was there and it was only $500 million.

The real reason we’re doing this and the coolest part about this is if we’re successful in donating that $3 billion then for the first time in all of human history, there will be no hungry people on the planet. That’s what we’re here for.

Tony, we didn’t get to this first. How did you get started?

We saw an opportunity. We’re builders of technology, my co-founder, Matt, and I. You can buy a lot of things on the internet in the US legally, but you can’t buy a lottery ticket. Why is that? We found the way to do it and then we realized you have to work with the states, work with the governments to make it permissible. That’s the way to do it. We’d always say, “We’re not here to disrupt the industry, we’re here to help advance it.” We’re now doing that same thing with our STO. We’re going through our security token offering. It’s fully compliant.

There are a lot of people out there that are going to read this who don’t even know what that is. We skipped the part where your lottery is on the blockchain. Is there cryptocurrency involved as well or no?

We will be accepting cryptocurrencies. It depends on geography and our licensing in each jurisdiction, but yes.

In some places in the world you’ll be able to use it. How are you working with the blockchain in this?

A security token offering, there’s an ICO, which is typically a utility token. We looked at that and we realized we couldn’t raise money that way because we’re in such a highly regulated industry that we could anger some of the states or the countries that we work with. When you look at a security token, it’s a security. It is a Reg D 506(c) offering, recognized internationally. We say we’re security first, blockchain second. If you can tokenize that security and make it digital, all you’re doing is putting it on a liquid exchange in twelve months and then it trades like a stock. That’s a better way to raise money no matter what your project is.

Besides going to Lottery.com, how can people find out more about what you’re doing? The announcement about who this secret NGO is. How can they get that as well?

Thank you so much for all you’re doing, Tony. We appreciate you being on the show. 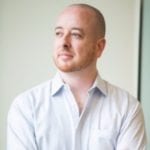 Serial entrepreneur currently serving as the Chief Executive Officer of Lottery.com, a venture-backed technology company based in San Francisco, California, and Austin, Texas, with additional offices across the globe.

DiMatteo is responsible for global initiatives, and the development and execution of the Company’s long-term strategy. He is a sought-after industry speaker and thought leader, and his approach to entrepreneurship, cryptocurrency, and the gaming industry have been reported on in The Wall Street Journal, VentureBeat, TechCrunch, Inc. and more. He has also been a featured guest speaker at Tony Robbin’s Platinum Finance and Peter Diamandis’ A360 events speaking on digital currency. DiMatteo previously held numerous executive and C-level positions in tech companies across multiple industries is currently a leader in writing the playbook for security token offerings and serves as an advisor to several ICOs and blockchain companies.