Artificial Intelligence, Robots, Art and the Blockchain with Aleksandr Kapitonov 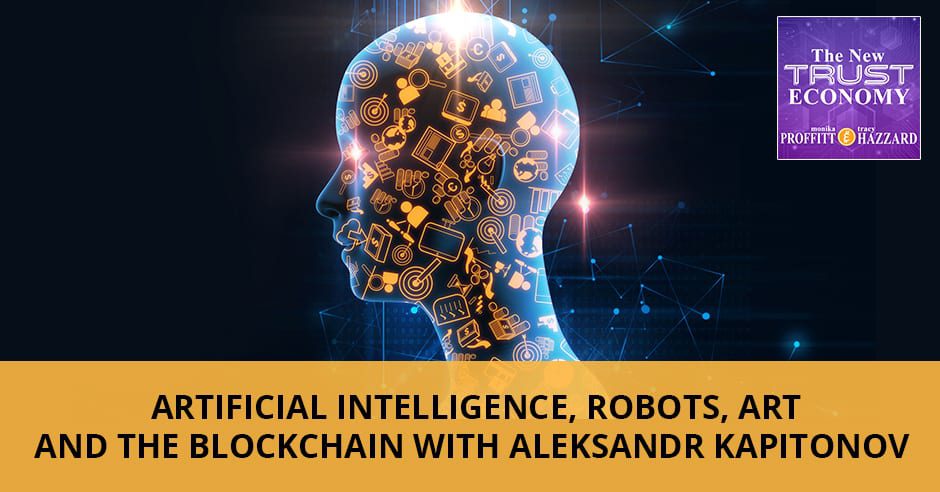 As the world becomes even more equipped with high technology, the talk about automating our processes with robots and AIs have been gaining traction. Aleksandr Kapitonov is an associate professor, serial entrepreneur, and co-founder of several blockchain initiatives and projects. He leads us into a talk about two of his most current projects – AIRA Lab and Robonomics. He shares how he went from working specifically on drone technologies to associating it with blockchain, explaining how AI and blockchain solutions make possible economic freedom for machines. Going deeper, Aleksandr shares how he decided to bridge a robotic approach to art itself, getting down to the engagement with commerce and the larger philosophical reason for it.

Listen to the podcast here:

Artificial Intelligence, Robots, Art and the Blockchain with Aleksandr Kapitonov

I’m here with Aleksandr Kapitonov. He’s an Associate Professor and Cofounder of several blockchain initiatives and projects. He’s a serial entrepreneur. I’m very excited to have him on to talk about AIRA Lab and Robonomics, his two most current projects. Welcome, Aleksandr.

Thank you for the presentation, Monika. It’s nice to meet you too. Let’s start to discuss difficult stuff about robots and how it will be integrated into our everyday life.

It’s not only a blockchain issue and an AI issue, but it’s a social issue. It’s a political issue. It’s something that people are talking about all the way from the World Economic Forum all the way down to my cousin who works on an oil rig out in the Gulf of Mexico thinking about how a robot could take his job away. This is a huge reaching topic. I’m excited to talk about the specific applications that I’ve seen, some examples that you’ve been working on specifically and also broadly. It looks like you’ve got a very broad reach. Do you want to talk a little bit about AIRA Lab and how you got started there?

We started the project several years ago. The key point was the first phase of the initial coin off rank where we took the ethers. It was May of 2017.

That was a good month. It’s a good time to be taking it.

Definitely, it was a good time.

When you took that money in, what did you do to preserve it? Did you move it to a stable coin right away or did you leave it in ether to then deplete and degrade again when the price went down?

We still have some ethers, on the consortiums might contract. It’s a contract for the company, how we control the cashflow inside the company. We stayed in ethers. I never cashed.

Out of AIRA Lab, as you were getting and going with that, how did you end up having Robonomics drop out of it? Can you talk a little bit about what you were trying to solve with AIRA Lab and how Robonomics dropped out of it secondarily?

It’s definitely a long story. It was started in 2015. We started with experiments with the drones because the drone, it’s a per single system, which can be fully autonomous right now. There is no problem. It’s only problems with the law. We are still waiting for the rules for the flights, for the communication and between the drones.

You are working specifically on drone technologies initially. You saw that there was a blockchain play in here.

It started with drones and blockchain together. This is the initial idea because of my friend and Cofounder, Sergey Lonshakov is good in the blockchain. He started to work with the blockchain in 2011. I work with the mobile robotics and the drones from 2009. It was a big experience on both sides. That’s why we start to work for a solution using blockchain for robots. After that, we saw that drones, not only a single application for the blockchain. It can be used for the communication and information exchange between different autonomous systems like smart factories and the Internet of Things.

Now that you got to smart factories and the Internet of Things, that’s exactly where I was leading. There is a cool YouTube clip that you have about a smart vending machine. First of all, that clip is so helpful, but can you summarize it a little bit? Let me know how did you decide that that was the best, easiest way to explain your AI and blockchain solution to the first average user? How did you land on the vending machine?

This is not a new idea because before that Nick Szabo described a similar machine. It was related to some bank system. The principle was the same. They were all thinking, “We found that vending machines can be fully autonomous. It can pay for itself for the rent, for the electricity, estimating the goods, what is needed right now. For the estimate, for example, for season goods, something like this. It’s not so complex to make it.

You picked it because it was a simple way to explain how technology is going to come in and change the way that even machines that we’ve come to understand very well historically are going to be upgraded through AI.

In this way, the blockchain technology makes possible for the economical freedom for the machines.

Can you talk a little bit about that? “Blockchain makes possible economic freedom for machines.” That’s an interesting statement. That’s almost tweetable. Can you explain that a little bit?

It’s a mind-blowing idea in my opinion. In the future, we will see some autonomous services that can earn money and spend it for itself or by itself. Before, only the bank system can be used for money change with digital money. It is impossible to create an account for your machine. You can create an account for yourself and delegate it to the machine but it’s a little bit unsafe. As you can remember in the movie, Bicentennial Man, there was a scene where a robot asked for the bank account. The bank officer asked why and the robot said that I want to pay rent, I want to buy goods and so on. There is the same thing. Right now, robots can be economically free and use their wallets by itself because we have the infrastructure. We have the solutions to create the hardware wallets that can be hacked or it can, for example, be destroyed if somebody wants to.

Things become a lot safer once you include blockchain technology. They also become hack-proof for any other robot-oriented hack as well. It becomes completely hack-proof, which is pretty incredible. You’re talking about some of these interesting blockchains and AI components are. We’re going from drones to robots in general to vending machines. I have to wonder, how did you end up wanting to make a robot artist? My background is in art. I was a working artist for many years. I’ve worked with thousands of artists. My last company was an arts and culture company. The last thing I would ever think that the future was going to hold was a robot artist in a viable sense. Tell me, how did you come up with the idea?

The thinking was next. We are searching for a simple solution where robots can produce the final product. In the case of robot artists or robot painter, their final paint, it’s a product. A robot can sell it.

A robot has its own wallet. A robot can now have an economy, even a creative economy. Have you any luck selling or with your robots selling art yet?

Yes. When it starts the new picture, the auction started parallel and you can make a bid. If your bid will be enough, the biggest one will buy this picture.

What have they gone for? 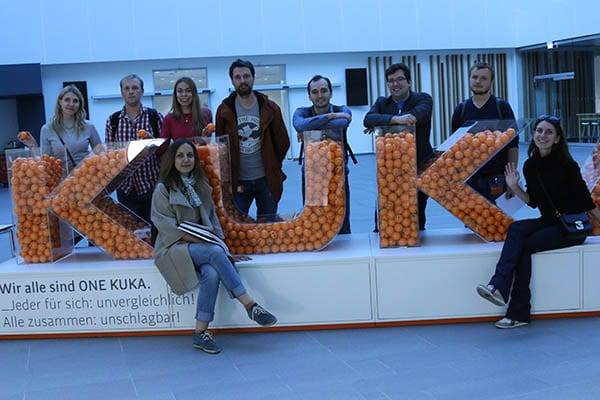 The maximum price right now it was like five ethers if I’m right. I think so.

Can you talk about what ethers were? What five ethers you’re talking about in current cost or in a previous valuation of ethers?

It was the maximum bid during one auction. I don’t know which one.

Ether was very highly priced or it’s much more different?

Why did you decide that you wanted to bridge a robotic approach and art itself? Was it for the engagement with commerce or was it for a larger philosophical reason?

Right now, all power is concentrated in the single hand, the hands of service providers. For example, as you can see the situation with Facebook and what they are doing with your data. In our vision, with the blockchain technology is you can own your information by yourself. You can decide. Do you want to sell your information or not and what kind? It’s not a big difference between the information from the machines and from the people because if something is acting in the real world and producing some information, it can be used for the future proposals and some models.

Is it to challenge the idea that things have to be human-generated?

No, in the future I think that information generated by humans may be like money. It will be short-term. The robots, they should loan and use some database for that. For the training data set, they can use the information from people.

What’s the reason why? For yourself, why are you so compelled by distributed technologies and artificial intelligence in general? Why is that interesting to you?

To continue my idea to what I started before. Now, the information is concentrated in a single hand. The distributed technologies can break and give back the information and the control on the information flow to ourselves. This is, in my opinion, important.

In my opinion, in the future we will see something like biological mechanical structure. It’s not the human separately from the robots, but human and robot like a common structure. That’s why to own the information about that structure should bring real profit for itself.

Bringing a blockchain plate is part and parcel to making your technology even function and be all that it can be. It wouldn’t work if it was centralized in any way. I appreciate you talking a bit about Robonomics and AIRA Lab.

You’re doing a lot of work with people on the West Coast. I’m wondering are you personally more of a morning person or a night person? Do you prefer to stay up late or do you prefer to work early and get up early?

It depends on the weather.

What kind of weather makes you want to stay up late at night?

It’s not so strong.

You have a preference for the weather on the time of day that you work. You’re not a morning person or night person.

I think so, yes. It depends on the size of the work because sometimes you’re busy and sometimes less busy and you can continue to be awake some 2:00 AM or 3:00 AM.

I want to thank you so much for taking the time to be on the podcast and give me a little more information about your companies. I wish you the best. You can find us at NewTrustEconomy.com. Thank you again, Aleksandr. It was wonderful having you.

Thank you, Monika. Let’s make the future close right now. We should integrate the robotic into our society.

Thank you so much. I’ll catch you next time on the New Trust Economy. 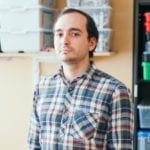